Forest structure can both reduce and intensify precipitation inputs to the ground surface at fine spatial scales. Areas of localized input at the soil surface may have large effects on deep drainage because of the strongly nonlinear relationship between soil water content (SWC) and unsaturated hydraulic conductivity. We therefore explored the following questions: Does forest structure that creates high spatial heterogeneity in canopy throughfall also create associated deep percolation pathways capable of quickly moving water beyond the rooting zone? Or alternatively, do soil properties resulting from biological activity (e.g. root networks) reduce SWC heterogeneity created by the focused inputs from the canopy and eliminate the potential for these deep percolation pathways? We explored these questions by measuring spatial variation in both throughfall and SWC within 8 forested plots of the Sarapiquí region, Costa Rica where soil texture is relatively homogeneous within deep, clay-rich soils. A novel method that combined soil augering and frequency domain reflectometry was used to assess SWC profiles below the most extreme wet and dry throughfall locations within each plot. Findings revealed relatively homogeneous soil moisture within the surface root zone (0–90 cm depth) with SWC values of roughly 45%. Below the root zone, SWC heterogeneity increased, with the wettest throughfall sites having significantly (α = 0.05) higher SWC than their paired driest throughfall end-members (by 2–15%). Below approximately 130 cm depth, SWC homogeneity was observed again. Physically-based modeling in HYDRUS-3D supports these findings and suggests processes that may explain these changes in SWC patterns observed with increasing depth, such as redistribution through macropores, focused deep-percolation, and lateral downslope flow, respectively. This is the first field-based study that explores the linkage between throughfall heterogeneity and focused deep-percolation, and therefore advances the integrated understanding of how the structure, diversity, and spatial heterogeneity of forests influence their hydrologic outputs.

Though limited, this is the first field-based study that explores the linkage between throughfall heterogeneity and focused deep-percolation and, in conjunction with paired work, advances an integrated understanding of how the structure, diversity, and spatial heterogeneity of forests controls its hydrologic outputs. 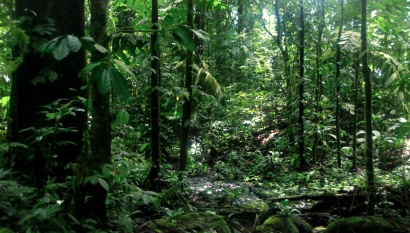 The role of the forest canopy in the hydrologic cycle has long being recognized, however there is still a need to link metrics of biodiversity to eventual ecosystem services. In this study we sought to quantify the relationship between two key components of this link – the functional and structural characteristics of tropical forest canopies and rainfall redistribution. Through the measurement of throughfall under old-growth and secondary forest canopies, and the assessment of their structural and functional characteristics we compared the mean and variability of throughfall between old-growth and secondary forests and determined the key vegetation properties correlating with throughfall. Our study was conducted during the rainy season in Northern Costa Rica in 14 (1 ha) forest plots encompassing a range of canopy cover types related to forest age and management. Throughfall was directly affected by rainfall amount. While mean throughfall amount measurements did not differ between old-growth and secondary forests, an effect of forest type was observed on the spatial variation of throughfall. Differences are suggested to be related mainly to the differential abundance of palms, which also underlie the relationships between throughfall and canopy cover, specific leaf area and canopy density weighed mean traits of species above throughfall collectors. The role of palms, as an a priori functional group and as relevant components of Neotropical forests, supports the stated relationship between biodiversity and ecosystem processes, and stimulates new research questions about potential changes in the hydrological cycle in these ecosystems in relation to successional changes in species composition.

The vast majority of Critical Zone research has focused on near surface and above ground processes while the lower boundary is generally poorly characterized and associated processes poorly quantified. Recent advances in geophysics, along with a greater appreciation of potential applications of geophysical data, provide an opportunity to improve this situation and potentially lead to important scientific breakthroughs. During the first 20 days of August, an intensive geophysical campaign was conducted at the RC CZO. Preliminary work by John Bradford at Boise State University was followed by extensive surveys conducted by a crew from the Wyoming Center for Environmental Hydrology and Geophysics (WyCEHG) headed by Steve Holbrook. Work was focused on experimental sites we had previously identified as potentially benefitting from additional knowledge of lower boundary conditions. We show preliminary data from four sites, a groundwater recharge zone where we use geophysical data data to understand observed water table responses, two sites on contrasting geology where we used intensive surface measurements to understand landscape evolution and streamflow response to hydrologic inputs and another desert site, where groundwater flows create spring and saline soils. We intend to follow this work with more detailed surveys and time series data.